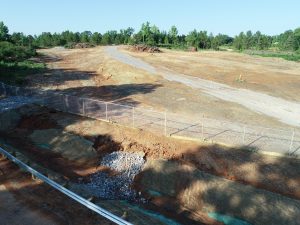 The ALAMO1 drone team was recently tasked to provide aerial documentation of a completed Superfund remediation project in east Texas. However, the day before we arrived, the area received torrential rainfall — several inches in just a few hours — putting the newly designed and constructed erosion controls and drainage systems to the test. As it turned out, our drone imagery would instead be documenting the effects of this rainfall on our site. 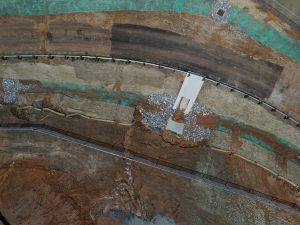 Through aerial surveillance we were able to cover the entire site within minutes and pinpoint all affected areas, allowing the construction and repair team to concentrate their efforts and resources where most needed.  Based on very clear images and video of stormwater runoff routes and impacts, the erosion management system could be modified and strengthened to be more resilient and effective.

With this use of drones, we were quickly able in very high-definition to inspect areas that would have been impossible to reach on foot or by vehicle at the time due to the extremely muddy conditions.  This is just one more example of the many ways drone imagery can save time, money and resources while improving mission effectiveness following disasters such as floods and hurricanes.